Regularly military toys make their reappearance in catalogs of manufacturers around the world; reappearance because from time to time, they suddenly disappear. This is currently the case since the legislation of some countries, and the use in others return to prohibit the sale of war toys.

We do not épiloguerons on the philosophy that could lead the legislators when they mingle regulating the toy market, but it may nevertheless be asked whether the possession of a machine gun in car 1 / 43rd encourages children to more have the warlike spirit a banal television news presented at a prime time.

The catalog Märklin 1930 had a great sampling of what power equipment of the Wehrmacht, and the famous builder Binns Road could not decently be outdone: it has given us, in Meccano, a very fine series military gear, this article will introduce you.

The first series of miniatures will be noted first that produced by Meccano, Hornby namely No. 22 series, included a tank, molded lead and wearing rubber tracks, curiously painted bright green and orange, then later in light gray.

These lines will be devoted to series published some years later, probably for Christmas 1937, but presumably widely available from 1938 only. For the sake of convenience, we will follow the order of reference:

150: This reference is given to an armored cavalry characters box. These military small measuring about 35mm were decorated in black and khaki. The 150A is an officer; The 150B is a soldier sitting; the 150C is a standing soldier and the 150D is a conductor; the driver differs from the soldier sitting by the fact that he has his arms outstretched while the second in hands on knees; 150E finally called NCO seems to be a soldier, walking idly. These characters were sold in light blue cardboard boxes which there are at least two different types; it seems that after the war, they were still marketed in the USA in yellow boxes.

151: This reference is given to the armored cabinet dubbed "Royal Tank Corps Medium Tank Unit.

This photo illustrates this box made of strong cardboard, blue outside and decorated with a green and white landscape inside. 151A: This is a tank Vickers MK2 cast zamak, measuring 92mm, with rotary turret, sheet flooring and functional caterpillars represented by Galle chains. This model, like all other matter, is decorated in matt green, the first series also included a painted triangle in white on the turret.

151B: The 151B is a three-axle Morris 3 tons. This truck is sheeted, it has a towing hook on the back and a molded steering wheel with the instrument panel. The front seat is perforated to collect two characters and the body has, inside a folded sheet of metal and perforated to transport 10 soldiers. This truck has smooth wheels before war emerged after the war with wheel hub. 151C: This is a field kitchen, rare and fragile, which includes a foot pivot support wire. 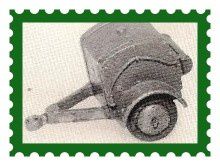 151D: The trailer ton of water that is working to full field kitchen all. The two trailers are never emerged after the war. 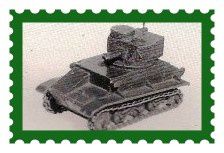 152: This reference is given to all light tank "Royal Tank Corps Light Tank Unit"; this box set released in February 1938 appears similarly to the cabinet 151 already described; it includes the 152A: Lightweight Tank which is also a Vickers with swiveling turret, antenna, floor plate and tracks of the same type as its big brother. This model is also finished in matte green, but it emerged after the war with black floor and not in green and painted body either khaki or brown. This remark on colors also applies to 152B which is a reconnaissance vehicle. 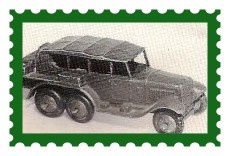 152B: This model deemed relatively uncommon until recently actually begins much less run the streets; this is an excellent reproduction of a semi armored car 6 wheels with hood covering the entire passenger cabin and luggage in cantilever rear. This model is out front with smooth wheels war and after war with hub wheels, floor sheet khaki originally being painted black later. 152C: This model is undoubtedly rare, it comes from the series 35 and represents an Austin 7 convertible painted in khaki with black rubber wheels completely, windshield wire and pilot reported generally painted black. The 152C is not reappeared after the war, which means that the gift box can only be prior to 1940, and the Austin 7 does not exist in brown.

160: 160 The reference is given a box of artillery characters, these statements are identified from those contained in the cabinet 150 by the color khaki and since they are not black, and the fact that soldiers wear helmets and leggings; the box was blue cardboard and yellow, can be immediately after the war for the United States.

161: Soldiers described above were intended to accompany the casket artillery No. 161 which includes in this gift box, blue on the outside and decorated with a green landscape inside a truck with a projector DCA gun.

161A: This truck made based on the 151B model is stripped of his coat, and has in the dumpster a folded sheet metal plate for 2 to establish military and receiving in its center a molded swivel projector zamak with a representation of the game glass made of sheet metal.

161B: The anti-aircraft gun is a beautiful piece with swiveling and pivoting gun, folding sides and with ammunition boxes and seats to sit for a total of 5 soldiers. This projector truck is unusual because it has not been reproduced after the war while the barrel with smooth wheels behind, emerged from 1945 with wheel hub, successively in olive green and brown; after the war, of course, this gun was towed by the 151B truck that had lost its special trailers.

Another view of 161A truck voisinant in this picture with the 22S. 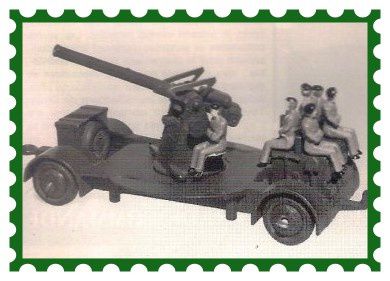 This photo shows a cannon No. 161B, from another angle, with 5 military after the war.

162: 162 The reference is assigned to a very interesting set entitled "Light Dragon Set". This 3 piece set is released before the war and after war, the variants are grateful to smooth wheels or hub, the floor painted in green or black and unfortunately also to the state of the metal.

162A: The tractor Grun called Bren Carrier allows transport 4 soldiers and climbed Crawler identical to those tanks (chain Galle). It towing a trailer ammunition No. 162B which itself involves harnessing a gun 18 pdr whose reference is 162C. Before the war this model was sold in individual box of blue cardboard box and after war 3 sets, made in light gray cardboard. 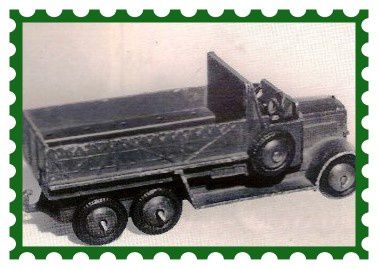 This photograph shows a 151B without truck tarpaulin, rear view; it is almost certain now that this model as a reference to be determined was marketed without his canvas several times.

This photo shows the same truck carrying 12 soldiers in the background and shows a military box 603 from the mid-50s. Close up of an extremely rare model whose existence has sometimes been questioned and which carries the 22S reference: in fact, based on the 22C-2 truck, Meccano achieved with a projector projector 151A truck cheaper painted in khaki too. This model is only prior to 1940 course has an opening in the rear of the cab. "Royal Corps of Signals Despatch Rider" is represented here with the reference 37C, 1938 and 1940 product, the model is olive-colored and light brown with white and blue pilot cuff. This extremely rare model must imperatively be in original paint because it can be manufactured easily by repainting a policeman Solo 37B using the same mold. 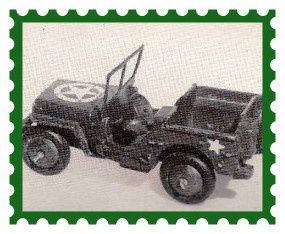 Finally the last photograph shows a Jeep that can not be before the war, and for good reason, but nevertheless represents the characteristics of Dinky Toys oldest, ie smooth wheels and a non-perforated steering wheel; this model must date from 1945.

Source: Monthly magazine Minis Plastic Metal No.86 of May 1983